The story of Ilo and Milo 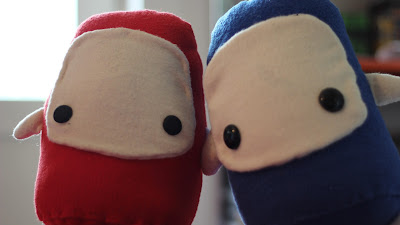 I’ve posted my Ilo and Milo animations here before, but now I thought I’d give some background information about these two. About a year ago, Albert introduced me to a game called Ilomilo.  Ilo and Milo are two friends that meet every day at a park in a strange world, populated by peculiar characters. In this bizarre world, their path to each other becomes obscured each time, thus Ilo and Milo have to navigate through puzzles to reach one another. In the co-op version of the game, each player chooses to play as either Ilo, or Milo, and then you alternate turns and work together to reunite Ilo and Milo. Albert used to always play as Ilo, or Ilona, and I played as Milo, or Milton. We quickly became addicted to the challenge of the puzzles, as well as the cuteness of the characters! We had seen some plushies and toys that other fans had made on the games blog page, and to no avail we tried to search for some that were being sold.

Christmas time was approaching, and since Albert and I had only been in a relationship for about a month, this was the first big ‘gift’ opportunity, and I wanted to get him something he would really like. Im a huge fan of handmade presents and cards, so I decided I would try to make him an Ilo- as a side gift/card, since I was sure it would turn out more ‘charming’ (read, shitty) rather than good. I hadn’t ever hand sewn anything so I started with zero knowledge. I used google to find out how to make a simple, but strong stich, and then began to work with some felt-like material that I found at a crafts store. The storekeeper did warn me that it wasn’t appropriate material for a stuffed toy- but I figured it would be good enough for the crafty thing I was making. I sewed the main body of Ilo and realized that perhaps this doesn’t have to be a just a crafty and "charming" present, so I purchased some higher quality material. The whole time I was making her I was stressed out! It was really hard to tell if it would work out or not until the very end, and since I was staying at Albert’s almost everyday, I didn’t have very much time to work on it. I completed Ilo a day before Albert left for England for the Christmas vacation and I was pleasantly surprised at how well she turned out. And most importantly, Albert really liked her too. :)

It was about three months later that I decided to make Milo. The process of making him was a lot less stressful, and since I already had all the patterns ready, it only took about 3 days to finish him- and this included the time I spent making the second stop motion animation. I have to admit, Milo turned out a little bit wonky! But according to my animation, Milo was made by Ilo (Frankenstein much?) therefore I think his slight kookiness is a happy accident.

Some technical notes:
Both Ilo and Milo are made of jersey material, Ilo of a slightly thinner one that I reversed (to get the fuzzy soft side), and Milo of a thicker one with a slight ‘furry’ texture to it. Both of their eyes are made from earrings that I found (this was the hardest thing to search for!), and then painted black with some glass paint, and then superglued on.

Well there’s the story of Ilo and Milo! Those two now happily reside on a small table next our couch and have both retired from the animation business- or at least are taking a long hiatus. I have some plans to make some original character’s to make animations with, but as of now I have nothing in the works- just some ideas that are slowly forming.
Posted by Anna-Kaisa on Tuesday, October 02, 2012