All moved in! I know it's probably more normal to be like "finally its over!".. but actually I feel like it all went really quickly! It feels like just yesterday Jussi suggested I move in with them, and then just with a few phone calls, some paper work and about a million trips up and down staircases, I'm all moved in! (ok, so I guess the actual physical part of the move was quite challenging, but it wasn't anything I -even hungover, couldnt handle!)

The day before "moving day" Jussi and Ilari came by with their car to pick up whatever bags, clothes or suitcases could fit. Then on Sunday aka "moving day" I spent about an hour in the morning carrying everything downstairs (except the washing machine- because that would have been physically impossible) so that it'd be ready for when a family friend showed up with the moving cart, and Jussi and Ilari with their car once again. Then after just about an hour, everything went in the cars, over to Haukiluoma, up the stairs (more stairs!) and into my room. Things go sooo quickly when you have such helpful people around. :)

So now its been about 4 days that I've been living here and its so great! My room isn't quite ready, but as soon as it is I'll put up pictures. I'm really loving having pets around too! Joona and Boris, the cats, are just so adorable. One thing I have noticed however is that our sleeping patterns don't quite match up. At night I leave my door open 1) because if I dont, Boris will fling his body up against it until I do, and 2) because I was hoping they would come cuddle with me at night.. unfortunatley they spend the early hours of the morning running, jumping, leaping, and crawling all over the place. Then in the morning when I get up and head over to turn on my laptop, there's Boris, exhausted from his playful night, sleeping so peacefully. But I have to admit they are really good pre-alarm clocks, and for someone like me that doesn't usually sleep through the night in one go, its nice to have something entertaining to watch while I try to fall back asleep. :) 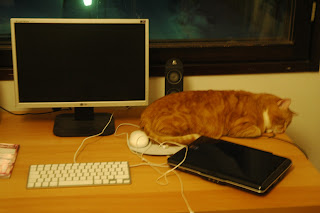