It's been a few weeks since Albert and I moved into our new place together, and I wanted to share one aspect of our home that I'm super proud of: Our purple wall.

We were so excited when we moved in and our new landlords told us that we could pretty much do whatever we wanted to the place: "Its your home now, do what you like" (side note: they did say no skulls or things of that sort, damn!) Not only was it exciting to be able to do something hands on with our new place, it was also a relief- our new lovely home had the most blah, and hideous golden-ish wall in the alcove. It had to go.

We began by toying with the idea of wallpapers, and were leaning towards something like this.
I'm not quite sure how we moved away from wallpapers and started to consider paint, but I think it was a mixture of: we don't know how to do wallpaper, what if it looks too patterny? Is black really a good choice?.. But anyways, we decided to paint.

I did some google searches for 'wall painting effects' and fell completely in love with the sponge effect! It looked so much more organic than wallpaper, but still had some life and intrigue to it that a solid wall just doesn't.

Next I revised my google searches to 'accent walls'. Accent walls are a single wall that is painted something different from the rest of the walls. Albert and I both really liked the blues, purples and reds- but since our couches are red we scratched that as an option. We didn't end up settling on purple, until we were at the paint shop looking at the swatches. We chose a lighter, slightly more blueish purple for the base, and then a slightly warmer redish dark purple for the top coat.

Neither of us had really done anything like this before, so we watched a lot of youtube tutorials before we began! To paint a wall like this you need: at least two different colours of paint, paint rolers, natural sea sponges, masking tape and newspapers.


Step 3: Paint the base coat 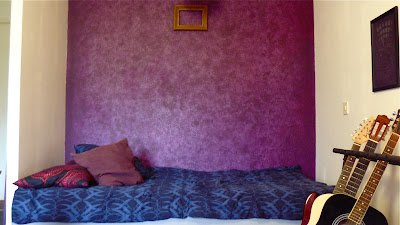 **Note! Albert and I weren't aware that the masking tape should be removed immediately after painting, otherwise when you remove them, they will pull away some of the paint as well. We solved this issue by running a key along the edge  (only sharp tool we had avaiable) but if you decide to embark on a project like this, it's smarter to remove the tape as soon as possible to get nice clean edges.