This past weekend I went with my parents to Hyvinkää to see my grandpa (read: Pappa) and I wanted to share a little something I made in the snow. Even though it was -6 degrees the sun was shining so brightly that it melted the top layers of snow and made it  possible for me to craft a little Snow Acid Bunny!  It's probably been about 13 years since I made anything out of snow, so as you can imagine I was pretty excited.


The building process went pretty smoothly but I did struggle with his mouth and eyes. When we had arrived at my grandpa's we were greeted by a colorful array of birds, so after a few failed attempts at using twigs and berries I opted to use sunflower seeds instead. I think they ended up looking pretty good and if the birds are brave enough to approach him, they'll get a little treat!

Here's a few pics that my dad took with his phone :) 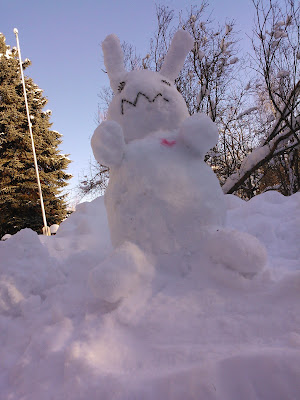