Check out my newspaper nails! Tutorial I used here. 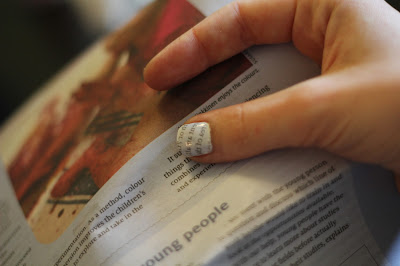 For the past few weeks I've been restraining myself from painting my nails to give them a little break and some time to strengthen. I have psoriasis (albeit mild) and I was noticing that my nails seemed to start showing some of the symptoms, and with the combination of the dry winter they were becoming pretty brittle and flaky. Growing up I've always had ultra-strong nails, so seeing some changes in them was a bit depressing, but with some strengthening treatments and regular trimming they seem to be back to their usual form.

I was originally planning to paint them mint green or some other very Springtime inspired colour, but then I looked outside and it was raining. Now I absolutely love sunshine, but this is the first rainfall of the year (spring is coming!) so I thought I'd do something a little bit inspired by the weather and thought this tutorial I found on pintrest was perfect!


I only had white nail polish, but I really wanted that grey newspaper tone so I used a section of the newspaper that had some background colour behind the text. For the soaking part I used some ultra strong mouthwash that Albert got from the pharmacy after having his wisdom teeth out, and also sprayed some perfume directly onto the paper since one of the comments said this made the text darker. Despite my apartment smelling kind of toxic, it was all pretty easy and a fun little crafts project. 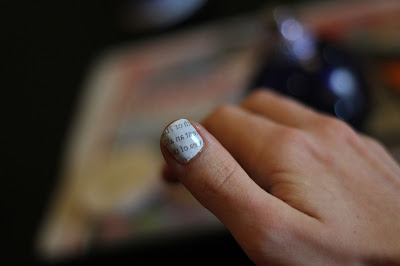 I'm curious to see if this would work with regular paper. I would really like to print out some text or images and have them reversed on the paper, that way when I print them onto my nails they would be read-able! Has anyone tried this?