I've been waiting for so long to write this post and now that it's here, I really just want to slap some photos on here and be done... but I'll try my best to weave in a few words and coherently as my exhausted mind will allow me.

So I mentioned a few weeks ago that Albert and I were making a game together, and it is ALMOST done... I'm done, but Albert still has a little bit of work ;) (he's the animation and coding mastermind)

Check out this teaser for the game!

This was my first ever official game project, and it was such a fun (exhausting, frustrating at times) process! I'd actually come up with the story for Acid Bunny long ago when Albert gave me a handmade birthday card with a bunny on it, but nothing really came of it. At first I made this plushie based on the character, and then we almost made a paper/flash animation, but somewhere along the line we just got too busy and forgot all about it. We finally came up with the game when Albert decided he wanted to take a break from his thesis and make some "quick game" so I suggested we use Acid Bunny.

My part in this project has been game design, character design, story, making plushies and giving advice/ideas whenever possible. I made 25 plushies! It was insane. Take away making food, working out, and going to the shop, I would be sewing all day every day. This feat was made even more difficult with my sewing machine's mood swings (she's an oldie, so she gets tired and refuses to work every now and then).. but now I'm done!

And look, I managed to get some words down as well!

Here's a picture of all the plushies! 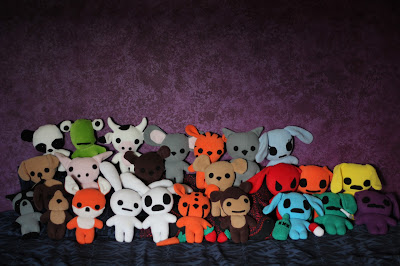 On the right side of the photo you can see Acid Bunny's 'hooligan' siblings, with their mom (light blue) behind them. His siblings are severe drug addicts, as you can see by the bottle, pill and joint. In the middle-ish front row you can see Acid Bunny, and on his right Acid Bunny having one of his notorious flashbacks. All around him are his friends, named simply after their species :)

The game will hopefully be out next week (free and online) so I'll be sure to post here once it is up if someone wants to go give it a try and see how my plushies tie into the game! I'll probably also post some more detailed pics of these guys once the game is out.

Oh and go ahead and like SeethingSwarm (Albert) on facebook ! That's where you'll find the most up to date information about the game :)
Posted by Anna-Kaisa on Thursday, May 30, 2013