On Tuesday it was Albert's birthday, and I did everything I could to give him a super nice day!

Starting with breakfast: A fruit salad with kiwi, strawberries, peaches, banana and watermelon. A pint of freshly squeezed orange juice, some egg on rye sandwhiches and strawberry quark with peaches, strawberry and  a dollop of whipped cream. 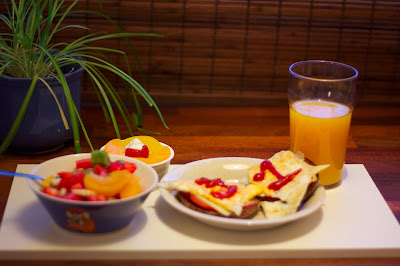 The rest of the day was spent in similar indulgence. Since we woke up so early (around 4-5am) we went for a morning coffee later at the look out tower and had some Finnish style donuts (munkki) and then went and played some mini-golf. Albert beat me by 1 point! But I guess it's customary to let the birthday boy win.. haha :)

We then met up with a friend and had a delicious Indian buffet at Nanda Devi. I hadn't had indian food in so long and oh boy did I miss it! I completely over-ate and felt like I could have been pushed onto my side and rolled home, but it was so worth it. 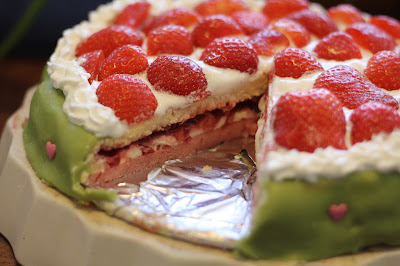 In the evening we had some cake that I baked the night before. It was sort of a 'prinsessakakku' or princess cake, vanilla cake with strawberry, raspberry and vanilla filling, marzipan, and topped off with strawberries and cream.


So no healthy recipes to be shared here, but I think an occasional indulgence is key to building a healthy and happy relationship with food :) But just as a precaution, I did run a little extra at the gym the day before in addition to my blogilates May Calendar workout, just to make sure that I wouldn't have any creeping feelings of guilt during the day. Eating always makes me happy, so right now I'm just teaching myself to let go of any guilt for an occasional over-indulgence.
Posted by Anna-Kaisa on Thursday, May 09, 2013